We are really proud to be of this beautiful new album Songen Om Guro by the traditional singer, Ingebjørg Lognvik Reinholdt. A song cycle from the Telemark tradition, it tells of the beautiful Guro Heddelid, who caught the fancy of pretty much every male from far and wide. Flirtatious and enjoying the attention, she had trouble deciding who to marry. Eventually she narrowed it down to the only two men who were strong enough to lift a particular sword: the rich and charming Torgeir and the poor fiddler, Tore. Tore had the soul, Torgeir the bluster. In the end, bearing in mind her deceased parents’ advice to marry someone who could keep the farm intact, she chose the wealthy Torgeir. Tore was devastated, utterly heartbroken and ran off into the mountains having lost his mind with grief. Torgeir was a terrible husband, drinking, fighting and not taking good care of the beautiful Guro at all. They had three children, all of whom ended up dying from the plague.

The album was recorded in Flatdal Kirke in Telemark in February. Such a beautiful time of year to be in the countryside in Norway. Several mornings I was woken up by the snowplough going past the house we were staying in.

I first met Ingebjørg when we were studying together at Norges Musikk Høgskole (The Norwegian State Academy of Music) and I was instantly bowled over by her rich voice and her ability to get the story across even if you don’t understand the lyrics.

The lyrics are poems from the local Telemark poet, Jørund Telnes, written in 1880.

You can hear it on Spotify here.

Hope you enjoy it! 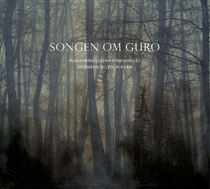